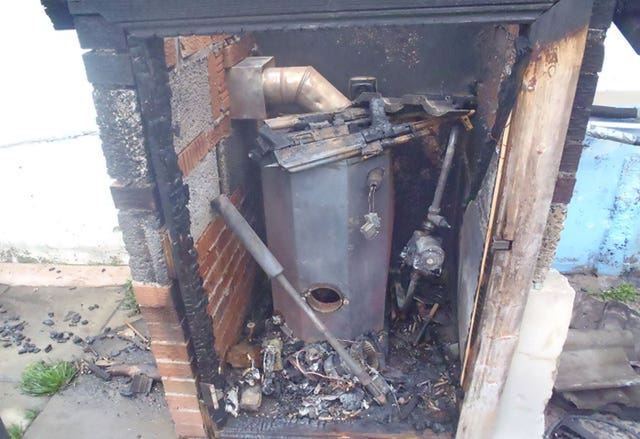 Two people have been arrested in connection with a gun shipment by dissident Republicans that was discovered in a boiler room in a Belfast apartment building.

Two AK47 assault rifles, two sawn-off shotguns, a high-powered rifle with a built-in silencer, three pipe bombs and more than 100 different cartridges were stored in the building that caught fire on Rodney Drive in west Belfast earlier that month.

Police believe the guns belonged to the so-called New IRA and may have been stored in the outbuilding without the knowledge of the home’s occupant.

They suspect some were used in previous assassination offers to the police.

A 31-year-old man and 33-year-old woman were arrested under the Terrorism Act in Ballymurphy on Monday.

Two properties in the area were also searched and a number of items were confiscated and are being sent for forensic examination, including a small quantity of suspected Class B drugs.

Property of the week: A farmhouse you would be proud to call…

“Some of the grenades exploded during a fire, posing a significant threat to residents in the area and once again demonstrating that these terrorists genuinely do not care about the safety of those living in their community.

“We will continue to disrupt the activities of those who seek to terrorize the community with their twisted ideologies so that people can live without fear.”

The guns, bombs and bullets were stored on an operating household boiler and officials believe the fire may have started when one ignited due to the heat.

Police understand the AK47s may have been used in two separate attacks on police by dissidents – one in November 2015 on Rossnareen Avenue in west Belfast and the other in January 2017 in a garage forecourt on Crumlin Road in north of Belfast Belfast.

In the first attack, a police car patrolling Rossnareen Avenue was riddled with up to eight bullets.

Armor plates and bulletproof glass were credited with saving the lives of the two officers in the vehicle when they were ambushed.

In the second attack, a police officer survived, although he was shot three times in the arm when gunmen opened fire on him as he stepped out of a parked police car in the Crumlin Road garage.

Officials said it was a miracle no members of the public were shot as bullets flew across the busy gas station forecourt.

Property of the week: A farmhouse you would be proud to call home