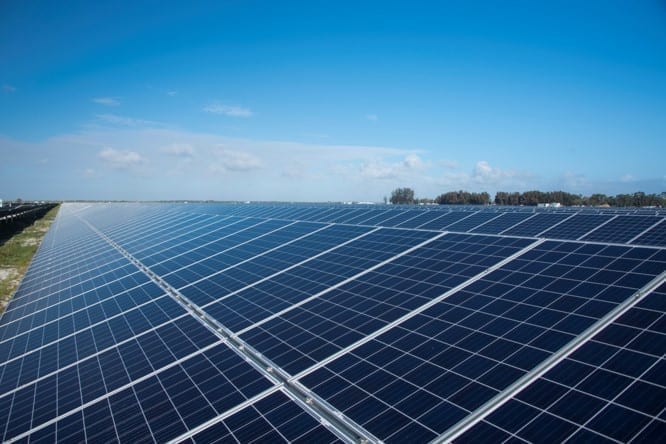 Solar Energy in the Sunshine State: FPL Leads the Way

Florida is known as “The Sunshine State,” so it’s not surprising that solar energy is growing rapidly across the state. One of the utilities that is adding solar resources to their energy mixes is Florida Power and Light Co. (FPL).

FPL claims to be the largest energy company in the US based on retail electricity produced and sold. The company has more than 5.6 million customer accounts and supports more than 11 million residents across Florida. FPL – a subsidiary of NextEra Energy in Juno Beach, Florida – says it operates “one of the cleanest power generation fleets in the US”.

“We’re big fans of solar energy and have been working to advance solar energy in the state for more than a decade,” said Jill Dvareckas, FPL’s senior director of development, as a guest on The POWER Podcast. “There are currently 37 solar energy centers in operation, and seven more are under construction. This makes FPL the largest solar power producer in Florida. “

FPL put its proverbial “toe in the water” in 1984 when it set up a 10 kW PV system in Miami. However, things didn’t really get serious about solar power until 2009 when it built a 25 MW solar power center in DeSoto County. Since then, 35 similar sized plants (74.5 MW each) have been added.

“Our commitment to clean energy is reflected in our groundbreaking ’30 by 30′ goal of installing 30 million solar panels by 2030,” said Dvareckas. If the company succeeds in achieving this goal, solar energy will make up about 20% of FPL’s electricity capacity by the turn of the decade.

In her position, Dvareckas is also responsible for deploying other cutting-edge technologies, including electric vehicles (EV) and battery storage programs. “There is no doubt that the electric transportation revolution is already underway,” she said. “FPL has been investing in clean means of transport for over a decade. We were the first electric company in America to put the hybrid electric shovel truck into operation in 2006. “Today the company has one of the largest“ green ”fleets in the country with almost 1,800 vehicles that run on either biodiesel, plug-in hybrids or electric vehicles.

FPL also has a pilot program for electric vehicle charging infrastructure called FPL EVolution. “Our goal with the program is to install 1,000 charging points in 100 locations in our service area across the state to increase the availability of universal EV charging by 50%,” said Dvareckas. Ultimately, more chargers mean less range anxiety for EV owners, which many consumers cite as a reason they don’t want to buy an EV.

“In our view, this is a pilot program that really allows us to learn before mass rollout as a utility to make sure that the infrastructure upgrades and repositioning we do in the future are done in a thoughtful manner, from which all our customers benefit, ”said Dvareckas.

During the podcast, Dvareckas shared details about FPL’s energy storage initiatives and also spoke about her path to a leadership position. She advised other women who want to succeed in the male-dominated world of power generation. Her suggestions include: “Work hard, speak out loud, and don’t compromise.”

To hear the full interview with Dvareckas, listen to The POWER Podcast on your favorite podcast platform. Follow the links below to go to the show pages, or click on the SoundCloud player to listen to it in your browser now:

You can find more power podcasts at The POWER Podcast Archive.

– –Aaron Larson is the editor-in-chief of POWER (@AaronL_Power, @POWERmagazine).