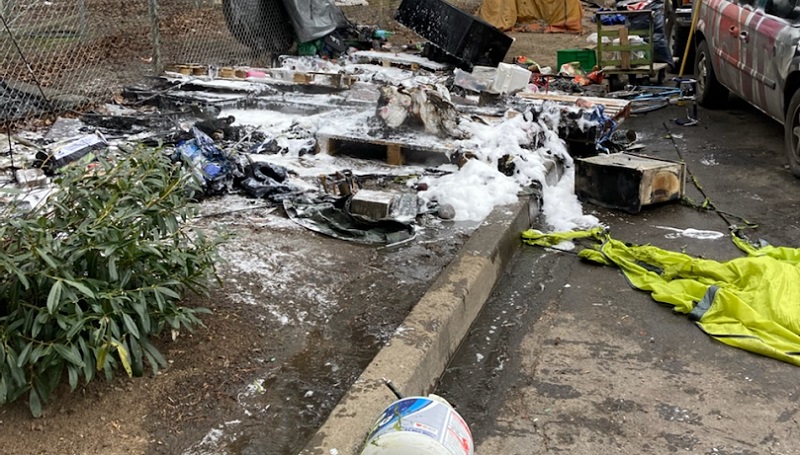 Man, woman in their forties rushed to the burn ward for treatment

Two people were badly burned in a tent fire in NE Grand and Everett on January 1, 2022 (PFR).

PORTLAND, Oregon (KOIN) – Two people were badly burned in a tent fire in northeast Portland on Saturday morning and two other people were burned from separate warming fires in southeast and southwest Portland, PFR officials said.

At around 9:30 am, a man and a woman were burned in their lower bodies after a loose hose attached to a propane heater in a tent caused an explosion and fire. Firefighters rushed to the crime scene in NE Grand and Everett and put out the flames, but people were taken to the Emanuel Burn Center for treatment. Your exact terms are currently not available.

About 30 minutes earlier, a man was using an accelerator on a warming fire in SE 6th and Woodward, officials said. He suffered second degree burns on his hand, but the man refused to be rushed to hospital for treatment by ambulance.

Another man suffered second-degree burns to his arm and thigh in another tent fire around 3:20 p.m., PFR said. Passers-by on SW 4th and Oak saw the fire, woke the man, and called 911. Authorities said his sleeping bag was accidentally set on fire by a candle placed too close to flammable objects.

This man in his mid-30s was taken to the burn center by ambulance for treatment.

Portland Fire & Rescue said it was the fourth warming fire to be handled in less than 24 hours.

Warm shelters are available in the area. Call 211 for the latest information.

Four thermal shelters that reopened in Multnomah County on Friday will remain open until Sunday morning. The district leaders said they plan to close the centers around 8 a.m. on Sunday.