A joint POSTECH research team led by Professor Hyungyu Jin and Ph.D. The candidate Min Young Kim from the Department of Mechanical Engineering with Professor Si-Young Choi from the Department of Materials Science and Technology has managed to develop a highly efficient thermoelectric device by optimizing the properties of both the interior and the surface of the magnetic material produced, the thermoelectric SSE- Start up the device. This is a landmark study that shows the possibility of making a next generation thermoelectric device using the SSE that has been preserved in basic research. This research was recently published in the online edition of Energy and Environmental Science, an international journal in the field of energy.

Conventional TE devices are based on the Ladungs-Seebeck effect, a thermoelectric effect in which a charging current is generated in a solid material in the direction parallel to an applied temperature gradient. This longitudinal geometry complicates the device structure and limits the manufacture of such TE devices. 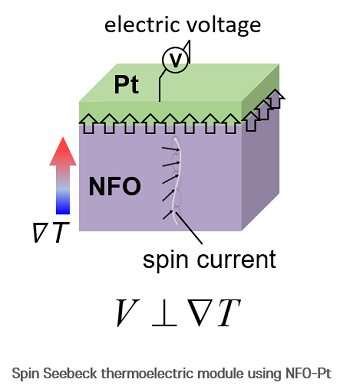 The research team created a nickel ferrite (NFO) – platinum (Pt) double layer SSE device by thinking outside the box. It was recognized that the device structure can be made much simpler by using the transverse TE effect in which a charging current is generated in the direction perpendicular to the applied temperature gradient. When a temperature gradient is applied in the height direction of the device, the spin current generated in the NFO magnetic material is transferred to the interface between the NFO and Pt, injected into the Pt, and then converted into an electric current within the Pt. The current generated at this point in time flows in a direction perpendicular to the applied temperature gradient. With this SSE, it is possible to design a device structure that is simpler and easier to scale compared to conventional thermoelectric devices.

In order to use the SSE device, a dramatic improvement in structure and efficiency is required. To this end, the research team developed a simple heat treatment method to improve the efficiency of the NFO-Pt thermoelectric device. Through observation using scanning transmission electron microscopy, it was discovered that a unique microstructure can be formed within the NFO material by heating it to a high temperature of 1200 ° C or higher for a certain period of time and then to a higher one for a higher temperature Temperature is heated given time then cooling. In addition, the team confirmed that the same heat treatment technique can also significantly improve the quality of the interface between NFO and Pt. Finally, it was shown that these two effects can significantly improve the thermoelectric efficiency of the device.

“In this study, we have explained and introduced the principles behind making the next generation TE device with a much simpler structure than traditional devices with SSE and a method that significantly improves efficiency through a simple heat treatment technique noted Professor Hyungyu Jin, who led the study. He added, “If this leads to the development of highly efficient PD equipment in the future, it holds great promise to ultimately help alleviate energy and climate problems.”

This document is subject to copyright. Except for fair trade for the purpose of private study or research, no part may be reproduced without written permission. The content is provided for informational purposes only.