Thermal management plays a major role in electric cars. The high-voltage coolant heater (HVCH) is an important part of this. ITgroup has developed test devices for the optimized, automatic and fast testing of these systems in production.

The electric drive offers a number of advantages over the combustion engine. For example, it can deliver maximum torque from zero speed and briefly operate with up to three times the nominal torque. This enables very high acceleration and makes gears superfluous. In addition, electric motors recover drive energy when braking, which further increases overall efficiency. In addition, they have a small number of wear parts and are therefore low-maintenance and correspondingly long-lasting.

However, the electric motor has a disadvantage compared to the internal combustion engine. Due to the lack of waste heat, electric vehicles are dependent on thermal management by means of electrical heating systems, for example to make trips pleasant in winter. What the tank is to the combustion engine, the high-voltage battery is to the electric car, the capacity of which determines the range of the vehicle. Since the energy for the heating process comes from this battery, the heating affects the range of the vehicle. This requires efficient thermal management of electric vehicles.

Thanks to the low thermal mass and high efficiency, HVCHs heat or cool very quickly, controlled via BUS communication such as LIN or CAN. Such a heating system works with 400-800 V. The interior can be heated up in no time and frozen or steamed windows cleared.

Since heating with directly heated air would create an uncomfortable climate, convectors heated with water are used, which avoid this dryness due to their radiant heat and are easier to regulate. “This water heater has to be parameterized, calibrated and checked for functionality and leaks. This requires an EOL test, which is carried out without the heating medium water, as the test process would otherwise take too long, ”explains Ingmar Troniarsky, Managing Director of ITgroup, a specialist in measurement, testing and automation technology.

Testing in production is usually done manually and is accordingly time-consuming and costly. A development by the ITgroup provides a remedy here: For a large vehicle supplier, the company has developed an EOL test system for the automatic testing of HVCH water heaters, which measures and checks various parameters of the heating systems over three stations within 30 seconds.

Automated measurement and calibration with three stations
The inspection at the first station is carried out by a newly developed robot. Thermal connections such as the connection between power electronics and cooling surfaces or cooling elements are tested here. A thermal imaging camera determines the thermal signature of up to 10 built-in power semiconductors. The corresponding test image shows whether all components are correctly installed and function correctly.

Since 25A are required at the HVCH with 500-800V power supply and 12V on-board network, the low and high voltage network must be safely separated from the rest of the vehicle. During the corresponding bonding check at station two, the heating elements are energized in the millisecond range, calibrated and all data is saved. “We have developed special contacting devices for this, which are handled by robots and which touch the current and high voltage on the test object. The contacts for the various geometric HVCH variants are provided in a station. The robot picks up the right contact and thus adapts the various connections (HV = high voltage, LV = low voltage, PE = ground) on the HVCH, ”says Troniarsky.

At the third station there is a performance test of the function / performance of the test object. By energizing the converters in the millisecond range, the system determines the performance data and sets the calibration values. In production, only 30 seconds are available for this, which is why the test is carried out at this point without a cooling medium.

Random offline tests of functionality
At an additional offline station, the functionality is randomly tested in a simulated vehicle and surrounding environment using a complete coolant circuit with a pre-tempered coolant under programmable pressure and flow. One or two times per shift, therefore, a “wet” test is carried out during production with automatic coolant filling, because the heating must function reliably even at temperatures from -20 ° C to + 30 ° C. In addition, when a car rumbles on bad roads, for example, pressure fluctuations and pressure surges in the coolant circuit can occur. Even under these circumstances, the heating system must function reliably. When the test is complete, the coolant is automatically drained again.

This complete solution from ITgroup, consisting of three inline stations and an additional offline station, offers the vehicle supplier, for the first time, a fully automated test without manual intervention by an operator, which saves personnel costs and time. The first three stations for thermal, HV and performance tests follow one another in the automatic production line. The system thus covers the entire HVCH test. Since the entire test system comes from a single source, error-prone interfaces are avoided.

Testing with the thermal imaging camera at station one. In the right part of the screen, the tester sees the image from the thermal imager with the colored temperature areas. Markings with the designation ROI show the measured areas. Before and after heating up, the temperature is measured to check whether all areas are properly heated. The measured values ​​are displayed in the left part of the screen. If it’s green, the reading is okay; otherwise it is highlighted in red 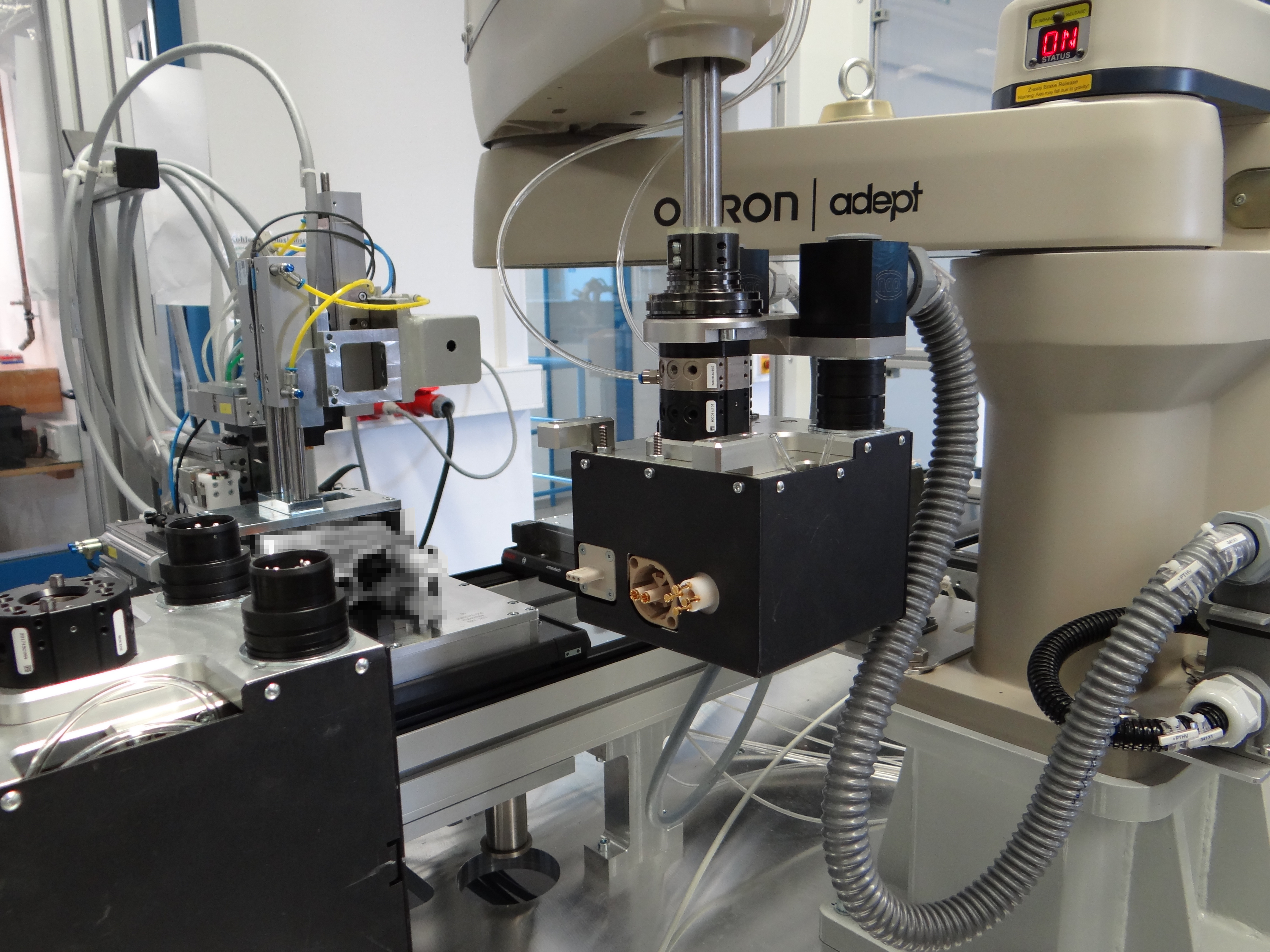 Contact head with three of the specially developed contacts for current / voltage testing and the robot that handles them. The contacts from left to right: low voltage and LIN bus, high voltage, ground bolts 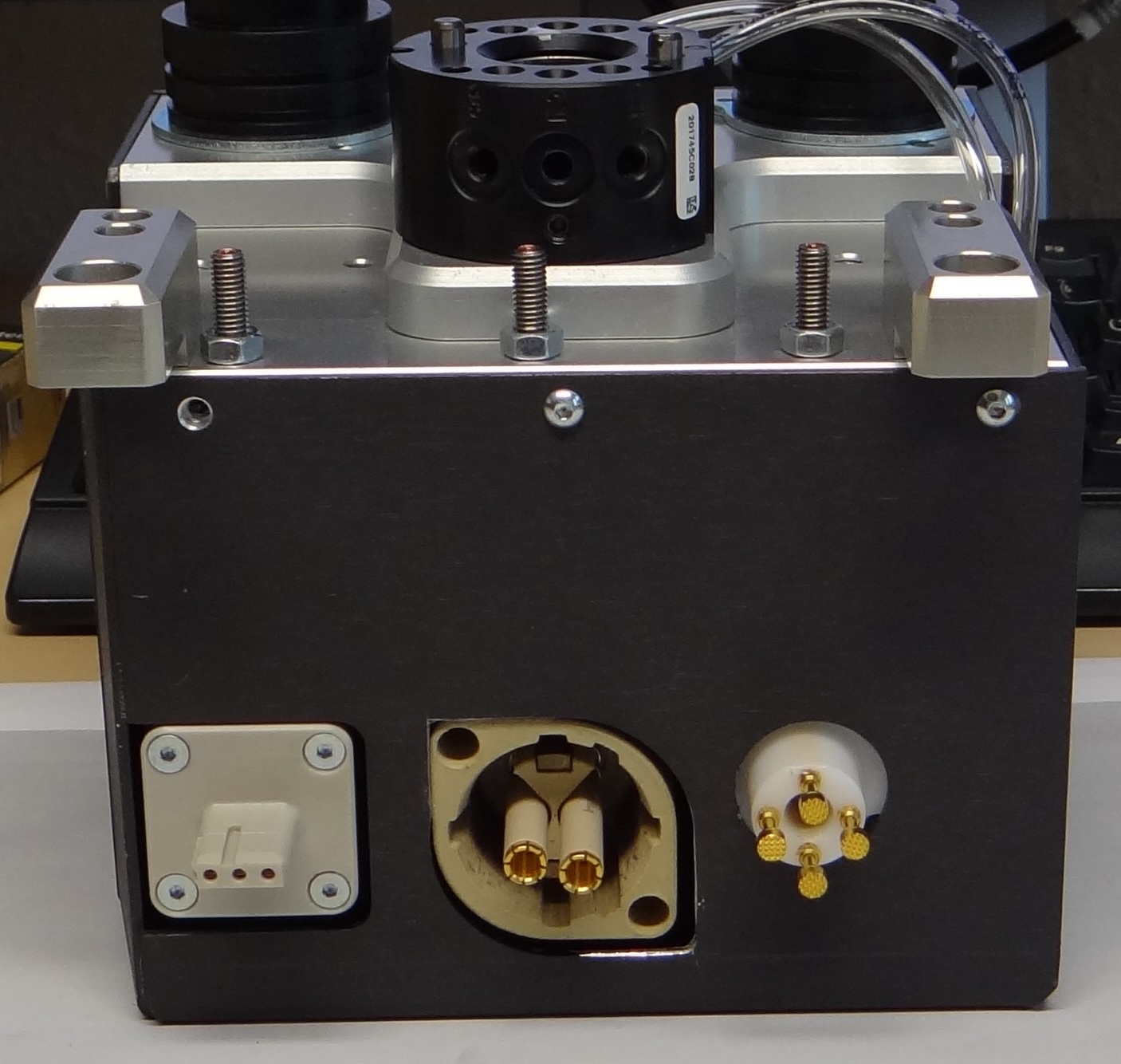 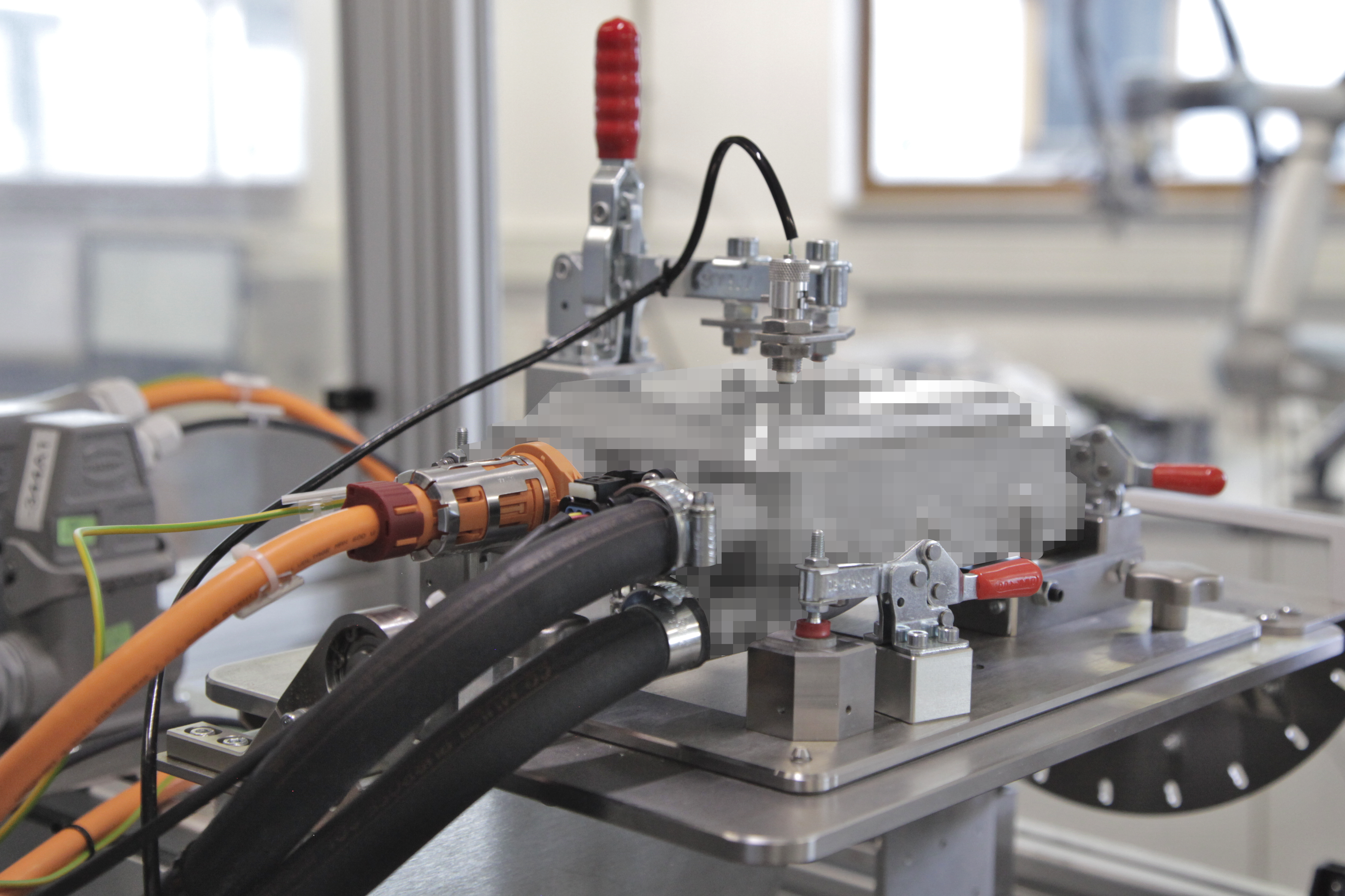 Test item connected to the coolant circuit. Connections from left to right: earth bolt, high-voltage supply (orange), low-voltage and LIN bus (only visible in section), coolant inlet / outlet. (The test item is pixelated here because we are not allowed to show it)